Feeling like everything just keeps going from bad to worse? How do we show up when we feel small and weak? What does it mean to go in the strength you have? A Bible study on Gideon for how God works when we have nothing to give.

Things were pretty bad for Israel. After 40 years of peace, the Israelites have started worshipping false gods, and God sends Midian to dominate them for 7 years. They drive the Israelites into the mountains, and destroy Israel’s crops and livestock.

Desperate, Israel cries out to God, who responds with an unnamed prophet, reminding them of all God has done for them, and how they have chosen idolatry instead.

But also – God hears and he acts.

He sends an angel to Gideon, who is quietly threshing wheat into a winepress to hide it from the Midianites. (That means removing the edible heads from the stems in what I’m assuming wasn’t the easiest way, but as sneaky as possible.)

Let’s dig in with some thoughts and questions in this Bible study on Gideon and Judges 6. 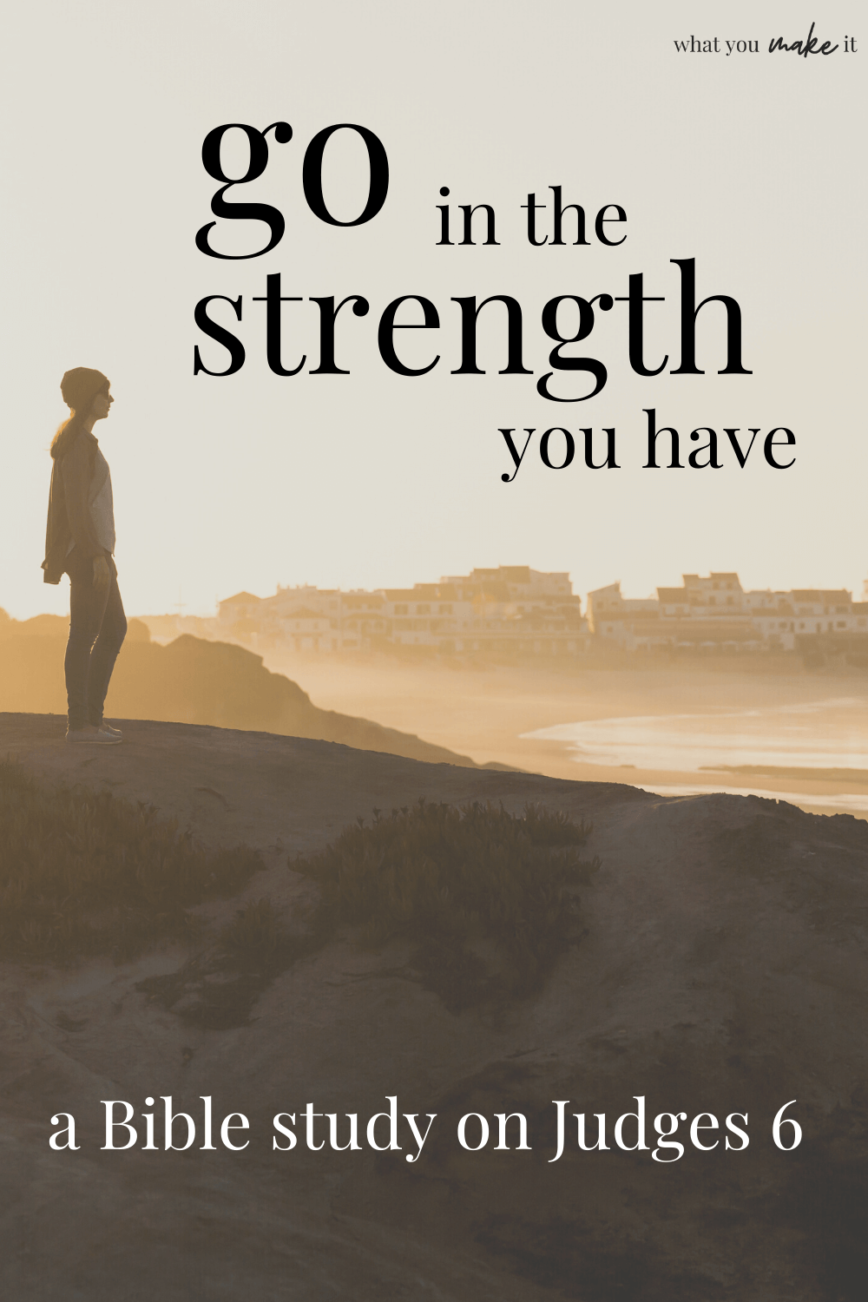 Here’s something curious: Gideon doesn’t recognize the visitor as being an angel.

People react to meeting angels very differently in the Bible. In Luke 1, Zechariah and Mary respond with shock and awe. On the other hand, in Judges 13, Samson’s parents have the same reaction as Gideon – not realizing it’s an angel until later. In Numbers 22, Balaam doesn’t even see the angel (even though his donkey does).

The angel’s words are startling: “The Lord is with you, mighty warrior.”

Gideon’s response is casual, as though speaking to just another person. I can just hear his tired and slightly droning words, “Pardon me, my lord, but if the Lord is with us, why has all this happened to us? Where are all his wonders that our ancestors told us about when they said, ‘Did not the Lord bring us up out of Egypt?’ But now the Lord has abandoned us and given us into the hand of Midian.” (vs.12-13)

Perhaps the angel wasn’t angelic in appearance at that moment. But is it possible we can miss an angel – or God’s message – even when it’s loud and clear, right and front of us? Could we be so caught up in our troubles that the evidence of God speaking to us goes unnoticed, unremarkable in our lives?

That’s not to say our troubles aren’t real or valid. But we can still miss God speaking to us if they drown out his voice.

How can we hear God when everything seems to be going wrong?

Maybe there’s a miracle on the way.

“Go in the strength you have.”

Then the angel says something even more startling: “Go in the strength you have and save Israel out of Midian’s hand. Am I not sending you?” Sorry. What?

Go in the strength you have. It wasn’t a lot. Gideon’s physical strength is small – his tribe is the weakest, he’s the smallest in his family. His fear is big; his faith is small.

But his strength was enough, because God made up the difference.

Maybe your strength feels lacking right now. You’ve been told of the miracles of God, but it feels like it’s been so long since you’ve seen them that you don’t even recognize them anymore. Your excuses feel bigger than your God.

The truth is that the strength we have is enough, when God is fighting alongside us. Whatever is lacking, God fills.

God calls us without explanations and detailed checklists. He just calls us to go, and he expects us to – in the strength we have, knowing he will be with us every step of the way.

This is all I have God. It’s next to nothing, but I’m willing to give it, because I know you are on my side and you equip me.

What can we learn from Gideon and God’s response? He took small steps.

Something I appreciate about Gideon’s story, something I find relatable about him, is that he obeys…small. He truly does go in the strength he has. And God is patient with that.

Gideon makes an offering…to see if “it is really you talking to me.” God responds with a miracle.

He tears down altars and poles made to false gods…but does it under cover of night. (There’s more to that story, but ultimately, he is protected.)

He asks for more signs from God before he has the courage to gather an army. God responds with more miracles.

I’m fairly certain that if he had gone out the next day to follow God’s instructions, gather an army and attack the Midianite army, he would have been successful. But he wasn’t there. The strength he had was small, and God worked with him through it.

Bible study questions on Gideon and Judges 6 for you to consider:

How do you listen to God? How do you know when it’s his voice you are hearing?

Where is your strength right now? Does it feel big or small? Wherever it is: what does it look like for you to entrust it to God to do great things with?

What’s one way you can start small with God in obedience today?

Feel free to answer below, or just use these as prompts for your own study!

10 ways to be more present and mindful

let’s all stop putting disclaimers on ourselves

35 things to talk about on date night

Stay up to date & receive the latest posts in your inbox.

This site uses Akismet to reduce spam. Learn how your comment data is processed.

10 bible verses for when you’re overthinking

Hi! I'm Jenn Schultz - wife, mom, writer of life-giving words. I share my messy faith journey to empower you to live freely and fully in grace.

Join 3000+ readers of Make It Count, my monthly newsletter! Get exclusive updates, bonus content, and more.

In honor of the return of Hocus Pocus… 🎃 Th

Maybe not quite as exciting as Taylor’s news, bu

Did you know that God invites you into a messy, im

True or false: Sweata weatha is the best type of

stay in the know